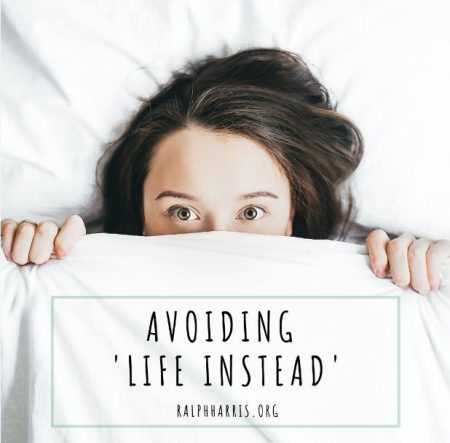 I have always been bothered when people “lead people to Jesus” by threatening them with hell so they’ll want to go to heaven. While I believe both places are real and you’ve got to be saved from the former in order to go to the latter, I’ve always thought the offer of life—a life you don’t have—is a better offer (see John 10:10). That’s why Jesus came—to give life. Since my new birth with God’s life, that’s been my emphasis. Here’s why.

I’ve met scads of people who “made a confession” to avoid hell and hope for heaven, but who hadn’t yet realized they had received a new life, the life of God, in the place of their former form of life—which was no life at all.

While our hearts beat and blood coursed through our veins, our condition before our second birth was dead in Adam and not yet alive in Christ (see 1 Corinthians 15:22). That means I crawled and then walked, slept, ate, drank, went to class, learned to communicate, learned to drive, got a job, all without the life of God, which I received when I was 24. It’s no wonder that when the Spirit brought me out of death and into life, I knew I was different—way different. But what if I didn’t pay attention to “way different”? Instead, what if I thought and believed, “Well, I got saved. That’s good. Now I’m a Christian, and I’ve got a whole lot of Christianish things to learn to do, and a whole lot of non-Christianish things to learn not to do.” What if that became my focus?

How long before new life became just another new groove? New manners for old? How long before the thrill was gone, and the greatest adventure of life—God’s life in me for my days—was left behind in favor of reliable and Christianized navigation skills? How long before I accepted a faux life as the Tin Man, even though I had a new heart where God lived? That would be the crime of the millennia, which only Satan could pull off. In other words, “Ignore what and who you have—life—and pay attention to what you can do to get what you want. That’s life instead.” But it isn’t.

This is what I believe has happened to people who once “made a confession”, or who “came to the altar,” but didn’t really know what they were doing except getting out of hell. And now they’ve grown weary of the manners they were taught to follow in the place of the life that would lead—life by the Spirit in them. After doing something undeniably awful, they wonder, “What’s wrong with me? I knew better. Why did I do that?” I think I know. They’ve been induced to attempt to live as though God didn’t live in them. That cannot work. That’s a ludicrous attempt to live in the way they once did when they didn’t have life. They’re terribly confused and act like it. Of course. If we tell them to behave better because “you know better,” they actually might—for a time.

But what if, instead, we taught crazy behaving believers about life? You know, God’s life? God’s life in them? What if we helped them to know their struggles to behave are understandable because they’re attempting to live well by a form of living without the One who has His own designs for life. We’d have their attention. And then we’d direct them to the Living One who is worthy of their attention and who is Perfect with them and in them. That’d be life, wouldn’t it? I think so. What do you think?

Because that’s where life happens.