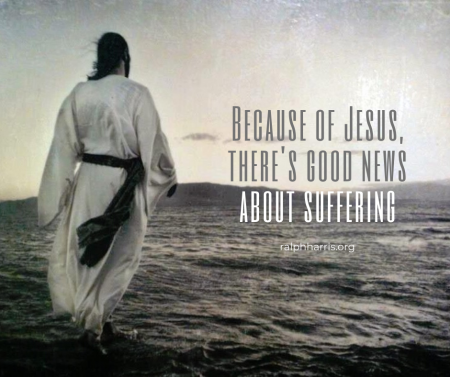 There’s a whole lot of fear and suffering going around these days. Far and wide. Have you ever heard or read that we’re supposed to “rejoice in suffering”? Like if we’re good Christians, we’ll act all happy and cheer-leadery when life is bad, difficult and painful? Many of us think the “rejoice thing” is true, but we’re not sure why.

So that’s the question: Why rejoice in suffering? Whatever for? If you make it to the end of this message and you’re still sound and sober(!), I think you’ll be really glad.

For starters, it is very common that we do not see ourselves as “in Christ,” but as separate from Him. Maybe walking alongside of Him. That’s a problem. The New Covenant speaks far more of our being “in Christ” than it does of Him being in us, so it’s a problem if we don’t think about it very much. It’s actually going to hurt us in some way. Because we don’t think about where we are, in Christ, many people become fairly terrified about “suffering for Jesus,” and I don’t blame them. Seeing it that way—as though we were separate from Jesus—I would be nervous, too. Why wouldn’t we feel exposed and vulnerable?

Much of my book, God’s Astounding Opinion of You, has to do with what God thinks He did for us and to us through the cross and resurrection, not the least of which is that He brought us into Christ, forever secure there, in Him. We have a new location, a new address that’s out of this world, and frankly, it’s astounding. He is in us and we are in Him.

Suffering that God permits is NOT directed at us, as though we will somehow become better for the suffering . . . if we rejoice enough. Suffering is not a penalty, suffering is not a goal, nor is suffering something that God hopes we’ll get through and by which we will get better. The sufferings of Christ at the cross have already had much to do with making us as good as we can get! But something happens to us through suffering. Something is produced in us and through us that shows something very important: it shows where God is—In us. He is in you. He is in me. And it shows how good He is where He is. We are together by design in suffering.

The target, the bull’s eye of undeserved suffering is Jesus, and that happens to be your location; it’s where you are—in Him. He is the target. Suffering is directed at Him. And what does He plan to do? Well, He plans to be Himself—what He is like—because of where He is, in you. That is your hope!

While we will grow in confidence about who we are and where we are (in Jesus), the purpose and hope for suffering is that Christ in us may be made evident—to us and to others—and that He will be exposed as living in us and affecting life through us. Wouldn’t that be great? Well, that’s the plan. Suffering gets at Christ in us, who is perfect for every need that suffering might put upon us.

This is why Paul wrote in Romans 8:18—I consider that our present sufferings are not worth comparing with the glory that will be revealed in us.” Wait. Who is in us? Jesus. His plan is to show up and to be revealed in us in suffering. Wouldn’t that be a glory?

Consider the following: 1 Peter 4:12—Dear friends, do not be surprised at the fiery ordeal that has come on you to test you, as though something strange were happening to you. 13 But rejoice inasmuch as you participate in the sufferings of Christ, so that you may be overjoyed when his glory is revealed.

Where is His glory going to be revealed? In you. In me. Whose sufferings were the people of God enduring? Well, not their own sufferings, but Christ’s. Did they probably feel like it was their sufferings? Oh, yes! But because these Christians knew where they were—in Christ—they knew better than to get deceived and accidentally rob Jesus of His sufferings and His opportunities. Satan would surely love to deceive us into believing that suffering is only ours, but we know the truth.

Where were the sufferings directed? At Jesus. And where would the evidence and glory of God be revealed? In and through His people. What a plan. That’s why they were going to be “overjoyed”. They weren’t going to be “overjoyed” because they were obeying a command: “Look here, my sons and daughters. Be overjoyed when bad stuff happens.” No. That’s not it at all. They were going to find “Christ in me, the hope of glory” (see Colossians 1:27). And the onlookers, the fans gathered in the stadium seats to watch the Supernatural Bowl that was happening in the Christians, were going to see Jesus. It’s the same for us today.

1 Peter 4:14 If you are insulted because of the name of Christ, you are blessed, for the Spirit of glory and of God rests on you. (He’s going to do something!) 15 If you suffer, it should not be as a murderer or thief or any other kind of criminal, or even as a meddler. (Well, that makes sense, because He’s not involved in that stuff.) 16 However, if you suffer as a Christian, do not be ashamed, but praise God that you bear that name…19 So then, those who suffer according to God’s will should commit themselves to their faithful Creator (Where is He? Inside of us.) and continue to do good. (Parentheses mine.)

This suffering “according to God’s will” attracts us not to a performance that we’re supposed to work up and carry out, but to God, who lives in us and who works through us. He is exposed, both to us and to our audience. We look for Jesus in us—inside and happy and capable. Perfectly. Of course! That’s how He is. That’s the plan.

This is what the apostle Paul wrote about to the Colossian Christians. It’s an otherwise odd verse: “Now I rejoice in what I am suffering for you, and I fill up in my flesh what is still lacking in regard to Christ’s afflictions, for the sake of His body (or the benefit of His body), which is the church” (Colossians 1:24, parenthesis mine).

Why would Paul rejoice in suffering? Because he knew who the target was, Jesus, and Paul was in Him. “Hey! I’m involved with God in suffering!” he might have said. And he knew that while the target was Jesus, Paul was the vessel, the pouring out place for God’s great display to everyone in view; Jesus was in Paul. That was the plan. That was why he rejoiced. Paul knew and saw God!

Think of the benefits that came from that. Prison guards and their families became Christians as Paul spoke the gospel to them. People were healed. Paul wrote the prison epistles—Ephesians, Philippians, Colossians and Philemon—under the terrible suffering and pressures of the worst kind of prison confinement. (It was nothing like a “self-quarantine” in a nice, well-stocked home.) Jesus was the target of the suffering, and Jesus in Paul was the evidence for which God had planned all along. The evidence of God came out of Paul, and Paul rejoiced at it. In suffering, we are together with God—Literally!

(This explains what’s happening in 2 Corinthians 1:3-11, where the Christians are sharing in the sufferings of Jesus, and the comfort of Jesus is overflowing from within them to others. It will help you to take a look at that chapter, and 2 Corinthians 4:7-12 as well. It’s terrific.)

See? This wasn’t so bad, was it? For the people of God, there’s actually good news about suffering.