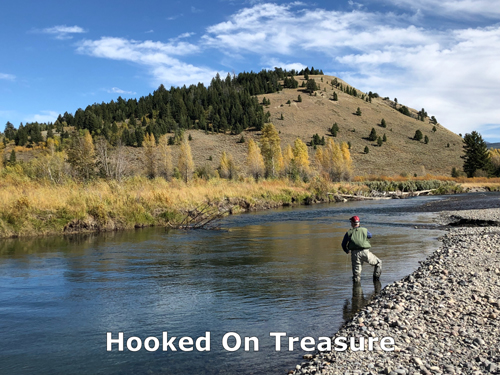 Is there a place or two that when you visit, you come alive? Maybe it’s a distance away, like a vibrant meadow, a mountain view, or a breeze that brings the scent of the ocean to you. Or perhaps it’s nearby, like a certain chair in the early morning or a walk through the neighborhood.

One of mine is an emerald pool on a secret river near Jackson Hole, Wyoming. Since the late 60’s, I have been wading through its long, slow waters and scanning the currents and sinister snags as I hunt what lies within it. The very moment I enter the water I find myself sighing deeply in welcome and relief. It’s as if the Divine Masseuse has begun gently massaging the cares and deep anxieties that have knotted me up, and made me tense, fake and mechanical. I don’t like Ralph The Fake, or Ralph The Robot. He’s not real. But somehow I can be held captive by him—a sort of hostage from myself. But not in the river. I get myself back.

There is a better way that brings me back to life, and I don’t have far to go to find it.

Years ago God worked in such a way that I discovered Him to be the greatest treasure. Not simply because of His value, supreme as it is, but because of what happened to me when treasuring Him. I wasn’t simply dazzled by what I found, like a pirate after lifting the lid on a treasure box; the radiance filled me and affected me! I was filled with the Spirit—God Himself—and I became the best Ralph possible. In other words, my Treasure treasured me! I was forever changed—and hooked on Treasure.

After that discovery, no commands to obey or tithe or pray or read or witness were really necessary, having been made superfluous by the one command: Enjoy your treasure. It happened again this morning when, resisting the impulses to read the newspaper or to turn on my computer, I turned my thoughts to Him. “Father, I need you. What are you thinking about today?”

It didn’t take long before the stone moved and there He was: Treasure. And I was treasured back. As a result, Ralph The Fake and Ralph The Robot vanished, driven away after a simple turn of my thoughts.

“The kingdom of heaven is like treasure hidden in a field. When a man found it, he hid it again, and then in his joy went and sold all he had and bought that field.” (Matthew 13:44)

The next time you’ve lost your way, resist the urge to go faster in order to get where you’re going. Instead, get off the common avenue, if only for a minute or two, and return to your treasure. He will dazzle you back to yourself. And that’s good.