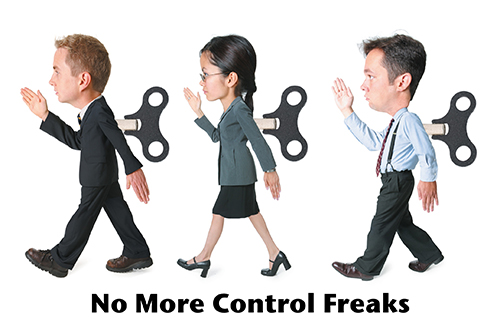 Do you know any control freaks? I do. And I don’t know about you, but I am sometimes visited by the powerful suggestion that if I would just get everything under control—get myself, get you, and get what I want to have happen all organized and directed by me—then everything would go well. Finally. Do you know that suggestion?

CONTROL. What do you do about it?

Many of us who recognize the inner struggle we have concerning “control”, tell you something like this: “YOU must give up control so that God can be in control.” Is that true? I don’t think so. That statement indicates that YOU are the problem when I don’t think YOU are. It suggests that you have a problem with control, but I don’t think you do.

Since you were born all over again through faith in Jesus’ cross and resurrection, YOU are not the problem; you have already lost everything that was the problem. There WAS a problematic former YOU, an old you, but in the same way that there was a former covenant, an old covenant, which has now been replaced by a new covenant through the death of Christ, so YOU have been replaced by a new YOU. As there is nothing you have to do in order to earn or become anything in the new covenant—the change has been made, it’s all secured, it’s all good—so there is nothing you have to earn or become as a new you—the change has been made. Yours is only to grow in believing the change has happened for YOU.

If you don’t know or don’t believe the change has occurred, then you will be in error, which hurts you, of course. Because you don’t know the cure of Christ, you will misdiagnose yourself and treat yourself as though you are sick. This will become a twisted and sickly caricature of Christianity; while perfectly cured, you will deny your health. You will frustrate yourself by looking for health—freedom from a former YOU—based upon what you do, rather than upon what Jesus did. That won’t work—of course not, because He has already done it. What He did is your cure and health, not what you do. Jesus was in the eradication and re-construction business with you, but you’re not.

Romans 6 tells you that you were crucified with Christ, and a new you was raised with and in Him. How good is that new you? Did Jesus get you right? Did His cross and resurrection work for you? I think so. What do you think? And that’s the issue.

You are well with God—“the old has gone, the new is here” (2 Corinthians 5:17). So you are not a “control freak”, neither are you your own worst problem, nor are you God’s problem. You are a new you, and you’ve been given a new way to live.

Ephesians 4:22-24 You were taught, with regard to your former way of life (the way you used to do things when you were a control freak, when you were a problem) to put off your old man, which is being corrupted by its deceitful desires; to be made new in the attitude of your minds (think about what happened!); and to put on the new man, created to be like God in true righteousness and holiness. (Italics mine.)

So instead of telling you that you must give up, you must surrender or lose control so that God can be in control, I would say it this way: You used to have a control problem when you were the problem, but now you don’t because you’re not. You used to be deluded by a belief that restraint and domination was the navigational way forward—but not anymore. Don’t get confused about the problem; it’s not you. Instead, stay in step with the truth and with the Holy Spirit, who is living in you right now, because control is not the problem now that you’re alive and you’ve got Him and His life. Believe—and life is with Him.

I hope this has encouraged you.