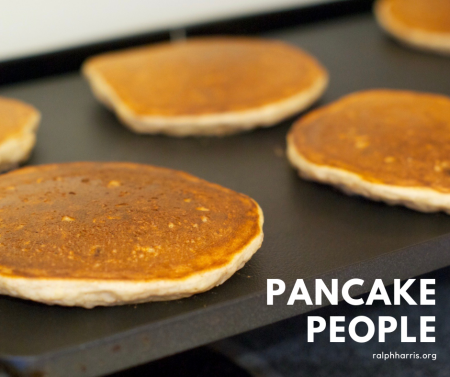 One should not believe that because I have not said anything about which candidate I support for the Presidency that I do not care which one is elected. I care. I will vote. Okay?

Sadly and tragically, it has been my experience that talking very much about current issues, specific candidates and the like quickly draws people into the shallow end of relationship, and it then becomes difficult, if not impossible, to talk deeply and of the heart. We lose each other and become “pancake people.” We become shallow, have heat only for a moment, and lack any real value.

We abandon our inner selves in favor of an attractive and nicely positioned look or prosecuted argument, which then becomes our exterior identity. Although the apostle Paul warned us against viewing people from a worldly and surface view because it isn’t true, it isn’t enough and it will hurt us if that’s all we get (2 Corinthians 5:16-21), we take hold of it anyway while our depths remain remote and malnourished. We’re starving ourselves.

Some of us have become quite accomplished as pancake makers, flattening people into shallow, issue-oriented identities like Republican and Democrat, conservative and liberal, heterosexual and homosexual, global warming alarmist, global warming skeptic, and on and on it goes. If I accept you as any one of those things, you’re a pancake to me.

There are those who have already made me into a pancake by placing me into a category (Republican, wacko-Christian, white male or whatever), and that has become for them more real and more important than my true, below the surface identity:

I am a son of God, who has been loved, hurt, rejected, rescued, betrayed, accepted, disappointed, hurt again, healed and loved again—both battered and buoyed over and over again. I’ve lived a lot. I have quite a story. And those people can’t know me or hear me anymore because they think of me with a worldly ID emblazoned upon my forehead: “Republican.” “Wacko Christian.” Whatever. Frankly, we’ve lost each other, even if we see each other every day. We’re pancake people, like it or not.

I don’t like it. Actually, I hate it. I despise it.

I post this in the hope that a few people will be awakened by a good kind of pain found in discovering that they, too, do not like pancake relationships—even if they’ve been the pancake makers, they recognize that they’re starving. Perhaps they will wonder why people do not talk heart to heart with them—maybe with you. Why they don’t share their inner fears. Why they’d never confess failure or admit weakness because they’ve never ventured into anything deeper than shallow-end stuff. Pancakes are the daily special, and the only thing on the menu. Is that clear enough?

But I would much rather get out of the shallows with you so we can actually get somewhere that counts, somewhere that’s deeply true and real. Life is found there, and I want to share.

And if you and I can’t share because we’re too far apart or something, I hope you hunger enough to start telling Jesus how badly you want to be real with Him and with people. He will be with you in that! Oh, there’s fear and some pain involved—yes—but there’s real food for real life that you’re supposed to have and give away, because none of us can live on pancakes.