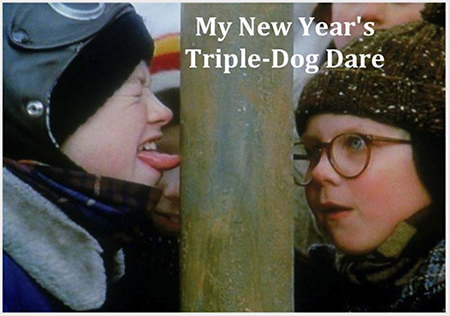 Here’s a triple-dog dare you.

Perhaps you’ve seen the Christmas-time classic movie, “A Christmas Story.” It’s one of my family’s favorites. While there are lots of great moments in the story, one scene drew a particularly large crowd. Best friends Ralphie, Flick and Schwartz were walking to school one frigid and snowy morning when an old discussion resumed: Will a tongue pressed on a frozen metal pole stick or not? Schwartz said it would, and Flick said, “No way!” With a crowd drawing round the flagpole moments before school, Schwartz loudly dared Flick to “Go ahead and do it,” if he was so brave. Flick, not altogether sure of his tongue-stick theory, stalled as long as he could until Schwartz called him out with a sequence of powerful verbal motivators: “I double-dog dare you,” and the ultimate, “I triple-dog dare you!”

If you’ve seen the movie, you know what happened—Flick stuck. Seconds later the school bell rang, so everyone hurried away including a triumphant and beaming Schwartz. Everyone except Flick. I can’t imagine a more vivid bit of education than frozen-stuck Flick gave that day, arms waving and voice wailing. No one would forget it. In the end, foolish Flick helped them all grow wiser because he took the dare.

Challenges have a way of motivating some of us, especially if it’s toward a good result. I would like to triple-dog dare you into what might seem to be foolishness at first, but it’s the unforgettable, apostle Paul type of foolishness.

Many of us are frustrated amongst a church that does not recognize itself. Most would agree that the percentage of Christians who believe they have truly become actual new creations, holy, blameless, faultless and righteous is very low. And that’s tragic. How can anyone truly enjoy the perfect intimacy God has achieved for us with Himself when we’ve got a serious disagreement going on about our union? Further, how can we benefit from trusting friendships within the church when we are unrecognizable to each other? The devil and this world have effectively disguised the sons and daughters of God, even to themselves. The cover-up, which cannot prevent our longing for the benefit of true fellowship, nevertheless frustrates the possibility of it. Sadly, we’ve been trained to settle for the outward appearance, even though we’ve been commanded against it.

“So from now on we regard no one from a worldly point of view. Though we once regarded Christ in this way, we do so no longer. 17 Therefore, if anyone is in Christ, he is a new creation; the old has gone, the new has come! 18 All this is from God, who reconciled us to himself through Christ and gave us the ministry of reconciliation: 19 that God was reconciling the world to himself in Christ, not counting men’s sins against them. And he has committed to us the message of reconciliation” 2 Corinthians 5:16-19.

Surrendering to worldly identities terribly injures us all. It’s not normal. It doesn’t work for us. We are obscured and reduced to life by masquerade—of pretending we are not what we in fact are. Imagine a day in which you throw off your astounding Christian identity and masquerade as a pig in a pen because the slaughterhouse is after cattle. Actually, you’re neither one, but that’s what it’s like when a noble Christian accepts the lowly images of this world—pork or beef. It’s a never-ending game that disguises us and keeps us playing dress up. It’s demonic and it’s hurting us.

A better fit for us, a Spirit-led, normal, life producing fit, is to boast in the Lord. He has made us to be just like Himself in righteousness—pure. Just like Himself in holiness—perfect. In redemption—complete. (See 1 Corinthians 1:30-31.) Wherever you are, you are at all times recognized in the heavens as having become magnificent—very much like your Father. Those in the heavens see what we must know. Otherwise, we walk covered-over and crippled.

Here’s my New Year’s challenge, my triple-dog dare you: Identify yourself to those who do not see you.

If you were to say, “I am a righteous man,” in the hearing of a few friends, would you be accurate? You would. Would they be surprised? Probably. Would you be arrogant? Not at all, since you had nothing to do with what God has done for you through Christ. Your boast is accurate and we need it. It’s healthy to say it, and it’s healthy to hear it. Or how about saying when with some friends, “It’s amazing that I am a holy daughter of God.” Oh, you’ll get “looks”, for sure, but you will be drawing back the worldly disguise that keeps you and your friends in a lie. Get out of that lie! Or what would happen if you asked a similar group, “Which of us here is the most redeemed and forgiven?” That ought to bring about some eye-opening conversation, don’t you think?

And don’t we need it?

It may be uncomfortable at times because we are not used to identifying each other as we are in Christ, but rather, as we appear in this world. We’ve accepted and grown accustomed to this world’s disguise . . . and to this world’s torture. Living in agreement with God sometimes means being out of step with the world, I know. While that has always been daring, it is also invigorating, especially on the inside, where God lives happily with you. You will be assisting yourself and others to the truth that makes free, and that is enormously powerful and unforgettable.

Begin telling people, at least occasionally, who you are. This may well cause something of a revolution amongst your friends, and they will likely ask how you got that way. Would that be so bad? You’ll have to tell them the gospel, and that’s when the Spirit has a field day—with you and with those all around. What a great thing that is.

Go for it. I triple-dog dare you.