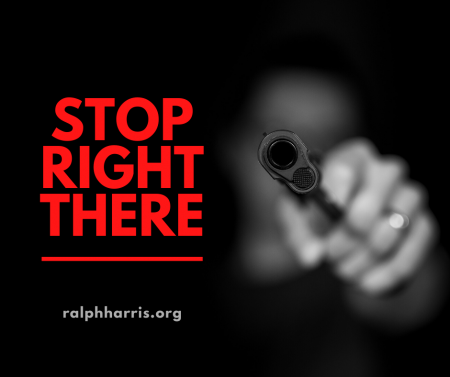 In the darkness of the middle of the night, I was wielding a baseball bat and chasing burglars through unlit hallways and across a rooftop. It was 1986, and another pastor and I lived in a church that had been burglarized earlier in the day. Separated from my fellow pastor, I pursued several fleeing figures that I could barely see, hoping to get close enough to . . . I don’t know what. Turning a faintly lit corner, I came face to face with a police officer, his gun drawn and pointing at my chest. “Stop right there!” he commanded. I did. “Who are you?” he demanded. Raising my hands and baseball bat above my head, I stammered, “I’m a pastor—Ralph Harris—and I live here. My roommate must have called you.”

I have never forgotten the feeling of grave danger and of being out of control. My life was on the line unless and until I answered that question adequately and the truth made the difference. I did and it did.

I want you to stop, at least for a moment, and answer the question, “Who are you?” However you answer that question will reveal what you think will save you because your life is on the line. Right now.

There is an awful lot that suggests an “awful you” or a “lesser you,” one that bears little resemblance to who you are because of how you’ve been made—or re-made by God. And if you’re reading this, chances are good that you know what I’m talking about: the new creation you. I’m not talking about the businessman or businesswoman you, I’m not talking about the student you, the employee you, or the father, mother, son or daughter you. Those are all tributary identities to the primary identity—to the source identity—to the “you”you truly are. I’m talking about the you that is clean, holy and perfect, the Spirit-born you, an actual son of God, a light in this world, in whom the Kingdom of God dwells, because God saw to it when he took care of you through the new birth in Christ.

I’m talking about that you.

I simply want to remind you today that sometimes you’ve got to stop or be stopped (as it was with me) in order to think again about who you are because it can get lost in the things we do. And if we have been made to live by faith in Christ (that He is who He says He is, perfect God toward man) and that you and I are who He says we are (perfect sons and daughters), then we’re going to have to answer that question, “Who are you?” We’ll even have to ask it of ourselves so we can proceed in our days and live from the answer. Only then can our lesser and tributary identities receive and be influenced from the source.

I don’t know about you, but I’ve got to ask that sort of question of myself all the time. As perfectly united with God as I am, having Him now inside of me, when I wake in the morning sometimes it seems as though God and I did nothing together at all yesterday, or that He doesn’t even exist, which puts me in serious trouble. I’ve lost my identity and am subject to the lesser ones of this world. There’s a lot of grief and twistedness there. But He does exist, and I am well with Him; it’s just that my thinking needs a repentance—a “WAKE UP!” call.

And then I am revived. The Holy Spirit in me sees to me, takes care of me, and together we can do all things. So can you when you’ve had your wake up call. Maybe this, “Stop right there!” will serve that purpose.