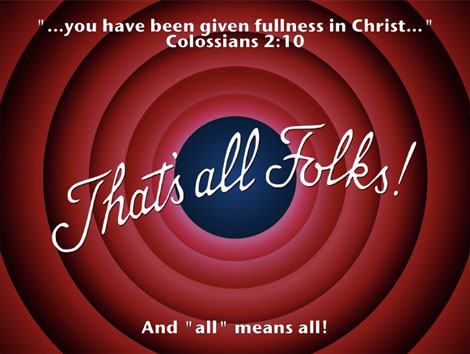 The way we take God’s grace for granted—the way we mistreat it—is to believe and act in a way that says we have to earn something from God, who thinks He has given us all things already for free. (See Ephesians 1:3-10.) In other words, if you want to really bother God, here’s how to do it: try to earn something from Him. (Good luck. Bon voyage.)

God’s grace never creates debt; it always pays debt. Otherwise, it would cease to be grace and instead become obligation. Oh, how that word bothers God! He’ll have none of it. Not with Abraham, not with the Galatians, not with you, and not with me. (See Romans 4:4-5.)

The apostle Paul got rightfully angry with the Galatian Christians who had fallen away from grace, because they were attempting to earn favor with God by their own behavior. The problem was, they already had perfect favor! They already had every blessing! Jesus had given it to them—in full. To believe otherwise was to believe a lie and to give themselves to that lie through their efforts. That’s how people get twisted and disappointed. Have you noticed?

Believing that we have to tithe, pray, worship, sing, witness, fast, or love in order to gain favor with God is anti-Christ. Doing something apart from Jesus in order to get what He presumably failed to secure is not only worthless, it is against the truth. That’s awful. For the Galatian Christians to add Jewish customs or ceremonies or rule-keeping to a supposed required mix was to put themselves under a curse!

Galatians 3:10-14 10 For all who rely on the works of the law are under a curse, as it is written: ‘Cursed is everyone who does not continue to do everything written in the Book of the Law.’ 11 Clearly no one who relies on the law is justified before God, because ‘the righteous will live by faith.’ 12 The law is not based on faith; on the contrary, it says, ‘The person who does these things will live by them.’ 13 Christ redeemed us from the curse of the law by becoming a curse for us, for it is written: ‘Cursed is everyone who is hung on a tree.’ 14 He redeemed us in order that the blessing given to Abraham might come to the Gentiles (That would be me, and most likely you) through Christ Jesus, so that by faith we might receive the promise of the Spirit. (Italics mine.)

In other words, by faith in Jesus, we get the Holy Spirit and everything that He brings with Him. You would be wise to assume that He doesn’t lack anything.

Every other hope with God, any other obligation-based hope with God is shadow living—it’s performing in the dark!—even though the reality has come (Colossians 2:16-17).

In Christ—which is where we are now—we have how many things? All things. That’s the incredible gospel we love! That’s the stunning New Covenant. And that’s why we’re crazy in love with Jesus. We’re out in the open about it! No one’s hiding this. We want to tell everyone, and we want to remind those who have forgotten and been lured back into the shadows. Come on out of there! No more performing in the darkness! Lies will have you there, and we won’t be a part of that; neither will God.

Because of Jesus, we have it all. And that’s all, folks.