THE WORST LIES OF RELIGION 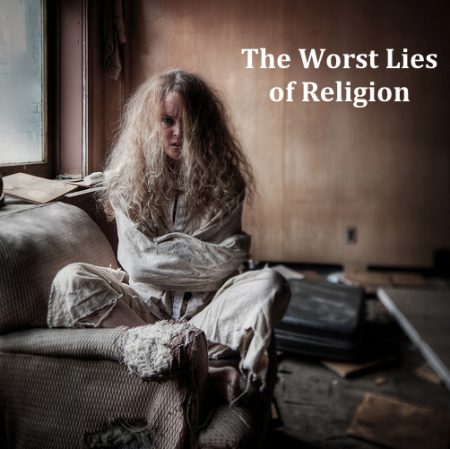 Let’s talk about everybody’s favorite topic, “religion”—the suggested rules of godliness. At its worst, religion entraps people by suggesting and encouraging “one day.”

Do you see the trap? Religion at its worst suggests you’re not holy, which means Jesus didn’t make you that way after all. Religion says you’re not set apart and just right for Him, you’re still dirty and sinful—even though He thinks you are not. Might that affect your relationship with Him and your approach to Him, and maybe your prayer life? I think so.

Religion motivates you to work and focus on becoming better, because Jesus didn’t make you complete, finished and perfect in Himself. Sooo, you’ve got work to do, even though He thinks you don’t, because He did it all already. Don’t live by faith in Him and His word, live by your feelings.

Religion promotes the possibility of drawing closer to God, which implies what? That you’re not now. You’d better figure out what’s standing between you and God, even though He thinks there’s nothing between the two of you that’s bad and that’s causing any distance at all. When you’re in Him and He is in you, there’s no moving away.

Religion induces you to keep striving in faithfulness because there’s a blessing He will give you that He hasn’t yet—a blessing that depends upon your faithfulness rather than upon His faithfulness. So you’d better keep tithing, keep praying, keep witnessing, and keep being nice because the blessing train is coming (“It’s right around the bend!”), even though He thinks that He has already arrived in you with all that He is and has. If He is the train, then you’re the station.

Religion suggests that you are still against God somehow and stubbornly resistant—that’s how you are—but if you try hard enough, you will eventually become real friends and get along. Won’t that be great? And, living the “surrendered life,” you will finally be useful, even though He thinks you’re entirely compatible already.

Religion falsely encourages you that, while you are not now much of anything good, “one day” you will finally give yourself a really good scrubbing and arrive. You know, “God’s gift to you is life; your gift to God is what you make of it”, even though He thinks His work in you is plenty already. He actually knew what He was doing. He’s finished.

The six statements I made at the beginning of this (and there are plenty more) suggest the lie that you don’t have everything that God thinks you do and that you’re not actually right now in Christ, who earned it all, who provides it all, and who maintains it all—right now and forever for you. In fact, you are fantastically wealthy and secure because of Him, and believing it is how you live! That’s the life of faith—believing that in Christ, you’re safe because He did it and you’ve got it all. Religion that entraps encourages you to see yourself (and others, such as your kids) as outside of Christ, with a whole lot of stuff to do so that YOU can earn what He hasn’t, so that YOU can provide what He won’t or might not, and so YOU can maintain—Keep things together!—what He cannot. That is not the gospel. That is anti-Christ.

Fortunately, we have already received “the promised eternal inheritance” (see Hebrews 9:15), and we’re becoming more and more convinced about how God is toward us and for us and in us—He is Perfect! And we trust and glory in His ability and in Him, “. . . who has become for us wisdom from God—that is, our righteousness, holiness and redemption. Therefore, as it is written: ‘Let him who boasts boast in the Lord’” (1 Corinthians 1:30-31). That’s the faith! We believe in Him; that He is perfect and good, and that He is in us—and we are forever secure because of it.

So let’s help each other with the truth—big, heaping platefuls, served regularly and at all hours. That’s how we’re nourished and how we can resist the lies, no matter where they come from.

Because of Jesus, “one day” has arrived.